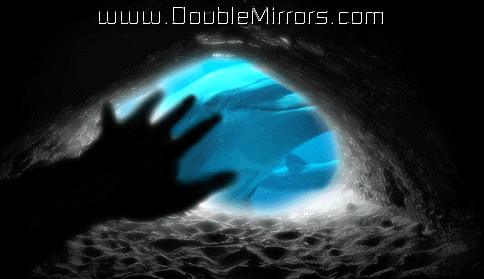 Plato writes of people who were trapped in a cave where all they could see is shadows of the outside world. Having relied on a perception of shadows for their entire lives, they assumed the shadows were in fact reality. One man, the visionary, if you will, finds his way out of the cave, and discovers the objects causing the shadows, and then, eventually, the light itself. Plato's allegory might seem clear by itself, but the fact that it has been misunderstood for thousands of years indicates it is somewhat lacking. The metaphor of Double Mirrors will shed light on any remaining shadows.

When these seemingly theoretical words are applied to man's search for the divine, the lies that have been instilled into the institutions claiming to provide this end will become visible. We must transcend to a spiritual existence where we can understand that what we assume to be true (science, rational thought), what we believe to be sacred (physical rituals of religion, Butler Library, etc.) are in fact mere shadows of a higher irrational spiritual Truth. Coming out of the cave and staring at a bright light is painful- "truth hurts," they wisely say- but there is ultimately nothing more worthwhile than this goal- transcending to Truth/Love/God.

After establishing the idea that there is a higher metaphysical Truth, Plato must define how this Truth is be attained. In the Symposium, Plato examines this very question; what is Love, and how is one to find it, being the central question of the book.

Plato writes that "through loving young boys correctly" one can transcend to a higher appreciation of love itself. "If anyone could become immortal it would be he," he adds. Hidden in these few words is Plato's contribution to Western civilization's struggle to find higher truth. Plato is arguing that it is possible to find a spiritual Love through embracing the physical.[CENSORED]

This idea was eventually perverted in Judaism and Christianity when Priests and Rabbis decided to decree only specific physical rituals as permissible for the masses. This was a wise political move- if such an easy and natural way of reaching God as sex was encouraged by an organized religion, nobody would bother spending time on less pleasurable interaction with the religion's clergy. Why go to church if you can stay home, have sex, and if done "correctly" as Plato writes, accomplish the same goal. If Double Mirrors is understood, however, it becomes clear that transcendence is theoretically possible through attaining harmony through anything on the physical level, and the idea of limiting the process to rote acts such as eating matzoh on Passover or participating in Mass and drinking the "blood" of Jesus is understood as being completely absurd.

The irony (God's sense of humor) is that even as the founders of the Judaism and Christianity were actively adding to man's spiritual confusion with lies, rhetoric and dead dogma, they unknowingly tapped into yet another form of spirituality. [CENSORED] What is lacking in the spirituality of the individual is made up for in the community, like a group of cripples all leaning on eachother for balance. As in the self contained spiritual energy of the individual, this spirituality develops an energy that feeds off itself, reaching infinite levels.

One might even argue that the potential spirituality in groups of people is stronger than in any individual. This is a question which is beyond the scope of this essay. I will say, however, that even if this is the case, just imagine how much more spirituality would exist in a community with a system allowing for each member to also attain transcendence individually. This is only possible in a system where everyone is completely free to conduct his or her own spiritual search. As with the sphere revolving around Truth, the number of possible paths is endless (the core of the sphere can be reached with an infinite amount of different lines from the sphere). When all the shadows are put aside, man's vision of the infinite- God/love/truth- exists independent of organized religion, and is in fact rooted in the inherent double mirrors of our individual minds.

At no point should the examination of the identity of the two mirrors overshadow the most significant element of the theory- its result. Let us not focus on the finger to the point where we ignore the moon ; an examination of the mechanism will only have meaning as long as the end product is understood. So I wish to assure that the fundamental theme established by the Double Mirror mechanism is understood. Few will dispute the fact that people are, by nature, spiritual. Those who say they don't believe in God will eventually admit to believing in some other metaphysical form of total harmony. Regardless of which words they chose- morality, spirituality, truth, love, or god- the meaning is the same. We must transcend the shadows of words. Atheists say they don't believe in god. I don't believe in atheists.

There is no such thing as partial harmony- if a so called "ritual" does not embody truth, love and God, (and as Double Mirrors suggests this is only know in the heart of the perceiver- God is determined by a harmonious set of dual perceptions) than it is has nothing to do with a legitimate search for God. A ritual like a Jihad might appear to be a noble attempt to transcend to holiness and Allah, but outside of the cave the lie is exposed. A killer of woman and children cannot possibly believe that his act is harmonious with both himself and his environment. Clearly such an act is contrary to his animal nature (animals don't murder) and obviously adds dissonance to his environment (his community). His own perception of this evil is the only thing which will project this stain into each of the infinitely descending mirrors of his soul. A sin is what is perceived as a sin.